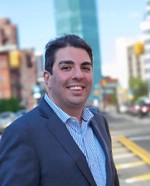 Eric Benaim’s entry into real estate began in 2001 after a successful career as owner of a live event production and marketing firm. Initially concentrating on Manhattan luxury sales, Eric later recognized untapped opportunity in his own beloved borough and turned his focus exclusively to Long Island City. The result was the sale of 50 residences in 2006 alone.

In the midst of 2008’s severe economic crisis, Eric instinctively decided the time was right to launch Modern Spaces, permanently changing the perception and value of real estate in LIC. In just over 8 years, Eric’s insightful and personal approach resulted in the swift expansion of Modern Spaces with additional offices in Manhattan, Astoria and Brooklyn, over 100 agents and has captured a 70% market share in Long Island City. He is responsible for successfully completing over $3.5 Billion in sales, and is currently responsible for overseeing over $4 Billion in real estate, which is translated to nearly 6000 units.

Eric was the first person to be recognized as a 40 Under 40 Rising Star in both Queens and Brooklyn by Mayor Michael Bloomberg and Brooklyn Borough President Marty Markowitz, respectively. He is a member of REBNY and serves on the Advisory Board of Mount Sinai Hospital as well as the Board of Directors for the Long Island City Partnership. In 2016, Eric was honored the City & State award for Corporate Social Responsibility. Eric is consistently called upon to speak at various events. He has been interviewed and or quoted in leading publications such as the New York Times, Wall Street Journal, CRAINS, The Real Deal and NY1.

Eric is an art collector and avid supporter of the arts. As the informal ‘Mayor of LIC,’ it is his passion for building prosperous community that informs Modern Spaces’ unparalleled perspective, he currently resides in Long Island City with his wife Stephanie and son Greyson.